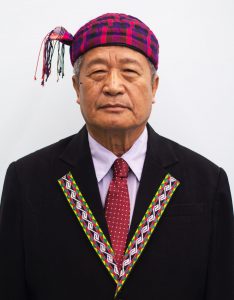 Duwa Lashi La is a Kachin politician and lawyer, who formerly served as the president of the Kachin National Consultative Council. He was born in Mung Ji village, northern Shan State. He attended secondary school at National Christian School in Kutkhai and graduated from Lashio High School with grade B. Upon graduating from high school, he worked as a teacher at Mung Ji School in his hometown. After working as a teacher, he retook matriculation exam in St. Michael’s School (now known as No. 4 Basic Education High School [B.E.H.S]) in Maymyo. In 1970, he went to Rangoon University and studied law. He received his Bachelor of Arts (BA) in 1974 and Bachelor of Laws (L.L.B) in 1975.

After graduation, Duwa Lashi La worked as a prosecutor in Myitkyina and Lashio for two years. From 1978 to 1994, he worked as a law officer for 16 years. After retiring in 1994, he started working with various civil society organizations (CSOs). In 2001, he co-founded the School of Intensive English Program (IEP), now Institute of Liberal Arts and Sciences (ILAS). He also took the lead in the establishing World Concern Organization (WCO) in NSS and worked on reginal development of NSS. He served at the Metta Development Foundation for seven years from 2004 to 2010. Additionally, he had collaborated with various international non-government organizations (INGOs) and worked to improve standards of living and health in vulnerable communities in NSS. He oversaw the Hope International Development Agency for four years from 2010 to 2014. In conjunction with the Transnational Institute (TNI) and UNODC, he led strict anti-drug activities and he also served as an elected president of the Kachin Literature and Cultural Organization of Northern Shan State for four years from 2014 to 2018. In 2019, he was elected as the president of the Kachin National Advisory Committee (WMR) and served until January 2021.

Duwa Lashi La has been serving as an appointed Vice-President of the National Unity Government (NUG) of Myanmar since April 16, 2021.

Duwa Lashi La is proficient in English, Myanmar, and Shan, in additional to his mother tongue Kachin and also well-versed in other Kachin tribal languages such as Zaiwa, Lachaik, and Lhaovo.