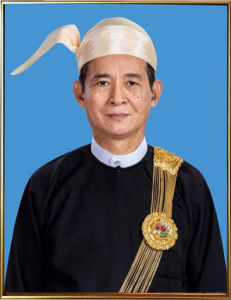 Win Myint (born 8 November 1951) is a Burmese politician who served as the 10th president of Myanmar from 2018 to 2021. He was the Speaker of the House of Representatives from 2016 to 2018. He also served as a member of parliament in the House of Representatives (Pyithu Hluttaw) from 2012 to 2018. He was appointed as NLD’s committee secretary for Ayeyawady Region and later became secretary of the NLD’s Central Executive Committee.

He studied primary education at Nyaung Chaung Basic Education Primary School and secondary education at Danubyu Basic Education High School, graduated with a B.Sc (Geology) degree from Yangon Arts and Science University. He is married to Cho Cho and the couple has one daughter, Phyu Phyu Thin. He also won Higher Grade Pleader and High Court Advocate degrees. He worked as a High Court senior lawyer and High Court advocate in Danubyu and Pathein, Ayeyawady Region.

He is a NLD member since the formation of the party in 1988, and had three electoral victories on the party ticket—being elected for the seats in his hometown Irrawaddy Delta’s Danubyu in the 1990 election, Irrawaddy’s Pathein Township in the 2012 by-election and Yangon’s Tamwe township in the 2015 election. Like many other political activists and politicians, he was arrested several times by the military regime.

In 2020 election, NLD had secured 396 seats of 498 contested seats in parliament. On 1 February 2021, military had staged a coup and he was detained by military along with fellow parliament members including the Democratic party leader, Aung Sun Suu Kyi in Naypyidaw city. After the coup, elected members of parliament with the mandate of people had formed CRPH (Committee Representing Pyidaungsu Hluttaw [Union Parliament] ). Later, they managed to discuss with ethnic groups, ethnic armed organizations, NGOs and stakeholders to work together for Federal Union and had founded Interim National Unity Government (NUG) aiming to topple military dictatorship and restore democracy back in Myanmar. He remains in his role as President in the newly formed National Unity Government of Myanmar.