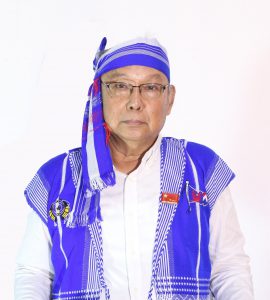 Mahn Winn Khaing Thann was born in Yone Thalin village, Hintada Township, Ayeyarwady Division on 23 April 1952. He is a Karen and Christian by background. He completed his high school in Yone Thalay village and he graduated from the Rangoon Arts and Science University with a law degree in 1975. He is the grandson of Mahn Ba Khaing, who was assassinated alongside Aung San, father of Aung San Suu Kyi in 1947 in Yangon.

He joined the Union Karen League as a committee member. He joined the National League for Democracy in 2013. He contested for the first time in the 2015 election and won the Kayin State № 8 constituency for a seat in the country’s upper house. He has served as the Chair of the Amyotha Hluttaw from 2015-2021. He has served as the Vice President of the Acting Government formed by the Committee Representing Pyidaungsu Hluttaw from 2021 March 9 to 2021 April 16. Now He serves as the Prime Minister of National Unity Government of the Republic of the Union of Myanmar formed at 2021 April 16.