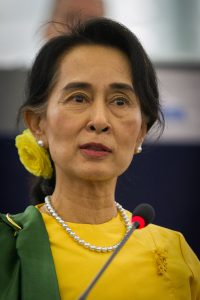 Aung San Suu Kyi, also called Daw Aung San Suu Kyi, (born June 19, 1945, Rangoon, Burma [now Yangon, Myanmar]), daughter of Aung San (a martyred national hero of independent Myanmar) and Khin Kyi (a prominent Burmese diplomat), and winner of the Nobel Peace Prize in 1991. She was the youngest of three children. She was educated in Myanmar for 15 years, until 1960, when her mother was chosen to be the Burmese ambassador to India. In 1967, she received a B.A. degree in Philosophy, Politics, and Economics from St. Hugh’s College of Oxford University, England. In 1969, she went to New York City to work at the U.N. Secretariat. In 1972, she married Michael Aris, whom she had met while studying in England. They had two sons together, Alexander, in 1972, and Kim, in 1977.  She continued her studies at Kyoto University in Japan for a year and completed her fellowship at the Indian Institute of Advanced Studies in Shimla, India in 1987.

In 1988, while she was in Myanmar taking care of her ailing mother, Myanmar’s military dictator since 1962, General Ne Win, resigned and there was a nation-wide uprising that the military junta in power suppressed by killing thousands of demonstrators. On September 24th, the National League for Democracy (NLD) was formed, with her as its Secretary-General. She was placed under house arrest at her home in Rangoon until 1995. During her imprisonment, the NLD, won the 1990 democratic elections by 82% – the military junta however, refused to acknowledge the results and remained in power. She had been detained before the elections and remained under house arrest for almost 15 of the 21 years from 1989 to 2010, becoming one of the world’s most prominent political prisoners.

Her party boycotted the 2010 election. She became a member of parliament while her party won 43 of the 45 vacant seats in the 2012 by-election. In the 2015 election, her party won 86% of the seats. She assumed the newly created role of State Counsellor of Myanmar from 2016 to 2021 Feb. In 2020 election, NLD had secured 396 seats of 498 contested seats in parliament. On Feb 1, she was arrested again during military coup. After the coup, elected members of parliament with the mandate of people had formed CRPH (Committee Representing Pyidaungsu Hluttaw [Union Parliament] ). Later, they managed to discuss with ethnic groups, ethnic armed organizations, NGOs and stakeholders to work together for Federal Union and had founded Interim National Unity Government (NUG) aiming to topple military dictatorship and restore democracy back in Myanmar. She remains in her role as State Counsellor in the newly formed National Unity Government of Myanmar.